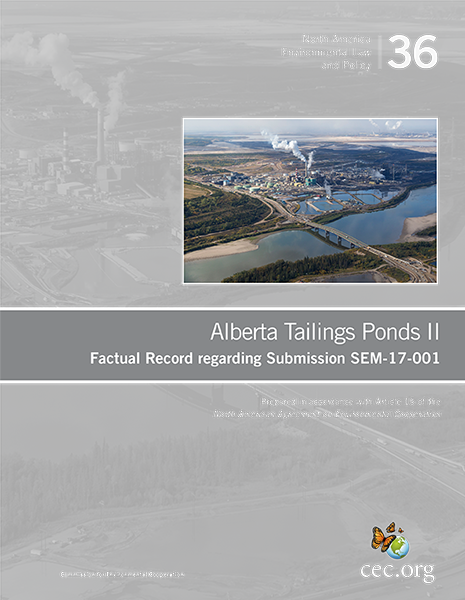 On 26 June 2017, Environmental Defence Canada and the Natural Resources Defense Council (based in the United States), along with Canadian resident Daniel T’seleie (the “Submitters”), filed SEM-17-001 (Alberta Tailings Ponds II) (hereinafter the “Submission”) with the Secretariat. The Submitters assert that the Government of Canada (“Canada”) is failing to enforce the pollution prevention provisions […]

On 22 January 2016, a person whose name has been kept confidential pursuant to NAAEC Article 11(8)(a) (the “Submitter”) filed an NAAEC Article 14(1) submission with the Secretariat. The Submitter asserts that approximately 100 tons of asparagus crop residues generated on some 13,000 hectares of cropland near the municipality of Caborca, Sonora (“the municipality of […]

On 30 August 2005, the Academia Sonorense de Derechos Humanos and Domingo Gutiérrez Mendívil (the “Submitters”) filed a submission with the CEC Secretariat in accordance with Article 14(1) of the NAAEC (the “Submission”). In submission SEM-05-003 (Environmental Pollution in Hermosillo II), the Submitters assert that Mexico is failing to effectively enforce its environmental law in relation to the prevention and control of air pollution in the city of Hermosillo, Sonora.

On 17 June 2003, Ángel Lara García (the “Submitter”) filed a submission with the CEC Secretariat asserting that Mexico is failing to effectively enforce its environmental law in connection with a polystyrene latex manufacturing and impregnation plant operated by ALCA, S.A. de C.V. (“ALCA”).