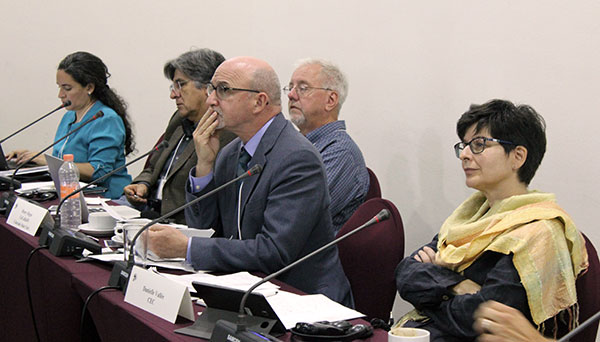 Meeting to assess the feasibility of establishing and expanding the CoCoRaHs network and other citizen science observers networks to complement national and subnational observational capacities.

9th Regular Session of the Council, Round Tables and Regular JPAC Session 02-02

The Council held its Ninth Regular Session on Tuesday and Wednesday, 18–19 June 2002, in Ottawa, Canada. The Honorable David Anderson, Canada’s Minister of the Environment, chaired the meeting. Governor Christine Todd Whitman, US Environmental Protection Agency Administrator, and Secretary Víctor Lichtinger, Mexican Secretary for the Environment and Natural Resources, represented the United States and […]

The Joint Public Advisory Committee (JPAC) of the Commission for Environmental Cooperation (CEC) of North America held a regular session on 8 March 2002, in Mexico City, Mexico immediately following a joint meeting with the Expert Advisory Board on Children’s Health and the Environment in North America.

The Joint Public Advisory Committee (JPAC) invites you to its first regular session of 2000 on 23-24 March, at the Hotel Camino Real Guadalajara, located at 5005 Av. Vallarta, Zapopan, Jalisco in Mexico. On 23 March, following opening reports, the public is invited to participate in a plenary discussion on the CEC’s Three-year Program Plan including the North American […]

The Joint Public Advisory Committee (JPAC) of the Commission for Environmental Cooperation (CEC) held a regular session in Anchorage, Alaska, on 8 May 1999. This session featured a round table on the CEC Three-year Program Plan and included the participation of the attending public, a representative of the US General Standing Committee, Mexican and Canadian […]