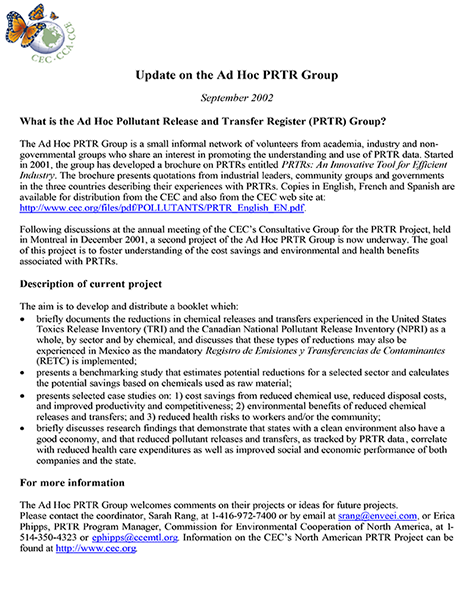 The Ad Hoc PRTR Group is a small informal network of volunteers from academia, industry and nongovernmental groups who share an interest in promoting the understanding and use of PRTR data. Started in 2001, the group has developed a brochure on PRTRs entitled . The brochure presents quotations from industrial leaders, community groups and governments in the three countries describing their experiences with PRTRs. Copies in English, French and Spanish are available for distribution from the CEC and also from the CEC web site.

Following discussions at the annual meeting of the CEC’s Consultative Group for the PRTR Project, held in Montreal in December 2001, a second project of the Ad Hoc PRTR Group is now underway. The goal of this project is to foster understanding of the cost savings and environmental and health benefits associated with PRTRs.