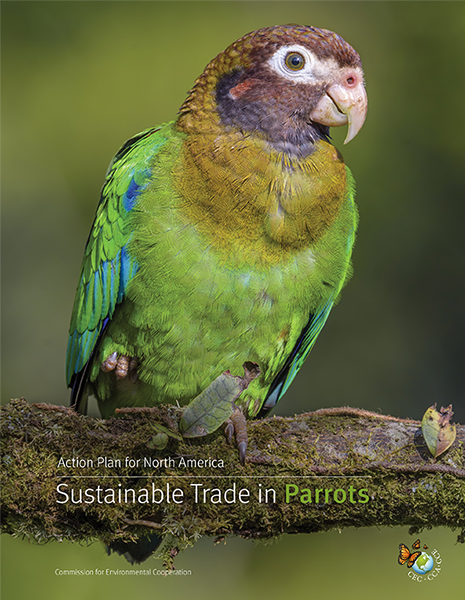 This document is one of a set of five action plans that were prepared as part of a project by the Commission for Environmental Cooperation (CEC) to promote legal, sustainable and traceable trade in selected North American species that are listed in Appendix II of the Convention on International Trade in Endangered Species of Wild Fauna and Flora (CITES). The five action plans were produced under the guidance of the CITES Authorities of Canada, Mexico and the United States.

Eleven parrot species, from seven genera, were originally selected for this project. However, a taxonomic review found that two of the selected species had been renamed and were now considered to be the same species. The ten species thus remaining were designated “priority parrot species” and are the subject of this action plan. Information was compiled for the species as a group, including the impact of trade on conservation and livelihoods; making CITES non-detriment findings (NDFs); and species-identification challenges for CITES enforcement. The ten species were also assessed as to their distribution, conservation status, trade and commercial value. A total of 19 recommended actions are proposed, to: improve cooperation among North American stakeholders; review government policies on captive breeding and trade; promote in-situ conservation; reduce the threat of introduced species; and build enforcement capacity. These actions were developed based on the information compiled for this document and from consultation with stakeholders. Consultation included a stakeholder workshop held on 25–26 October 2016 in Mexico City.