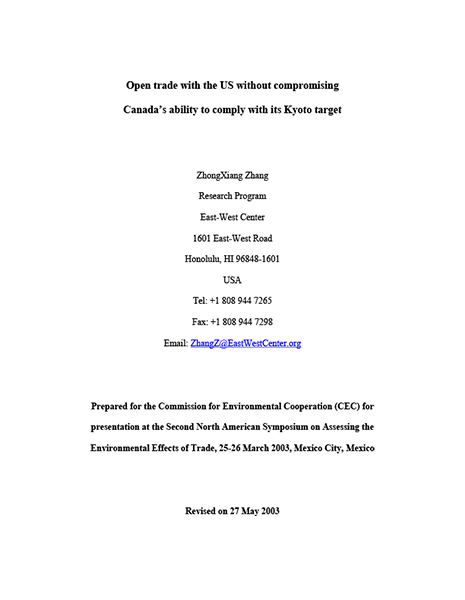 The U.S. and Canada are two important partners of the North American Free Trade Agreement (NAFTA). Canada, together with most industrialized countries, has ratified the Kyoto Protocol and begins implementing domestic policy measures aimed at meeting its legally binding Kyoto emissions target.

In the mean time, the U.S. has made clear that it will pursue a separate climate strategy as outlined by the Bush Climate Change Initiative, and thus that it will at least initially not be part of the international regime. Given that no other two countries in the world trade as much between themselves as do Canada and the U.S., Canadian industries have much greater competitiveness (trade) concerns brought about by the different level playing field where Canadian industries face mandatory emissions constraints but U.S. industry’ emissions are uncapped than Japanese and European counterparts. All this puts Canada in a very difficult position in meeting its Kyoto target, in comparison with Japan and the European Union (EU). Thus, focus on the U.S. and Canada is of much higher policy relevance than, say, focus on the U.S. and Japan/the EU. Against this background, this paper aims to address the following six major policy issues.