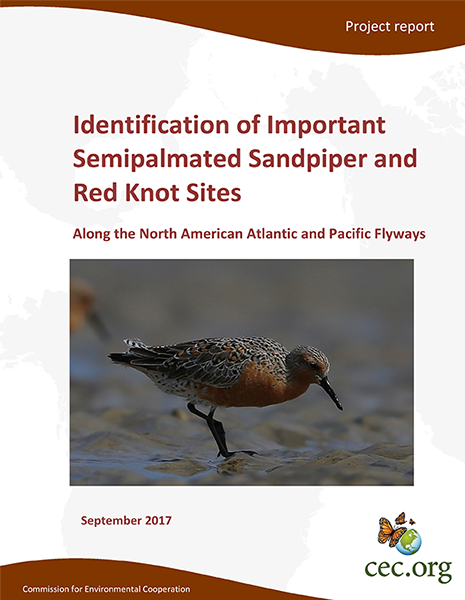 The inventory of key sites for Semipalmated Sandpiper and Red Knot was compiled from published information sources and publicly available databases. Once an initial inventory was compiled, it was sent for review by experts on the relevant species. Sites were then prioritized using the three levels of biological importance used by WHSRN (1, 10 and 30% of the biogeographic population). Detailed information for each site was compiled in a standard site matrix. Information on threats was gathered for all sites where a standardized threat assessment process had been undertaken. Finally, for those sites holding more than 10% of a population, local conservation leads and shorebird experts were contacted to help explore if local communities might be interested in participating in a North American network of sites to conserve shared shorebirds. Priority was given to discussing this with sites that are not already part of WHSRN.

A total of 88 sites were identified as holding 1% or more of the biogeographic populations of Semipalmated Sandpiper (18 sites) and/or Red Knot (79 sites). Standardized threat information was compiled for 34 of these sites. Of the 88 sites, 18 hold 10% or more of one or more biogeographic populations. Of these, one site (Delaware Bay) is important for both the Atlantic population of rufa Red Knot and Semipalmated Sandpiper. Of the remaining 17, one is important for Semipalmated Sandpiper, five for the Atlantic population of rufa Red Knot, four for the mid-continental population of rufa Red Knot, and seven for roselaari Red Knot. Nine of the 18 sites are existing WHSRN sites, while a 10th has a WHSRN site included within its boundaries. After discussions with local stakeholders, the top priority sites for WHSRN nomination and for conservation action as part of a site network were considered to be: James Bay, Ontario, Canada; Willapa Bay, Washington State, United States; Georgia Barrier Islands, Georgia, United States; and Bahía de Todos Santos, Baja California, Mexico.