Report on the first Trinational Workshop 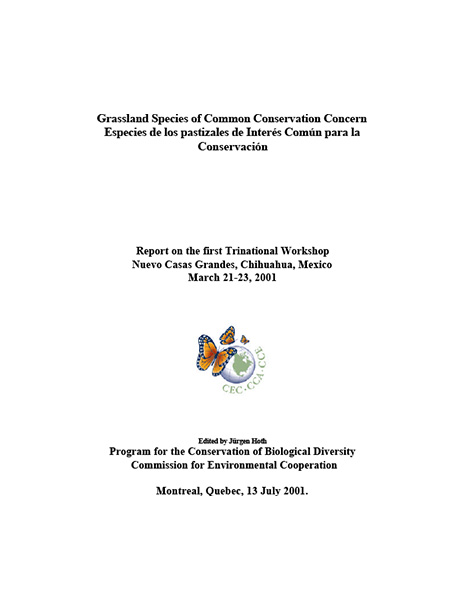 Report on the first Trinational Workshop

Grasslands are considered one of the most threatened environment in North America. Many conservation initiatives have been carried out to protect this ecosystem at a national and binational level, especially within and between Canada and the United States. Mexico’s potential importance, however, cannot be overstated; this country hosts the largest black tailed prairie dog colony remaining in North America.

Since 2000, the three federal Wildlife Services of North America have agreed to work together to protect 17 species of wild birds and mammals considered “Species of Common Conservation Concern” (SCCC). Given that the majority of these species are associated with grasslands, the CEC organized a workshop, with the assistance of the three governments, to establish the foundations of a conservation strategy for these species. The workshop took place in Nuevo Casas Grandes, Chihuahua, Mexico in late March 2001, and involved government representatives from Canada, USA and Mexico, as well as representatives from NGOs, academia and landowners. The keynote presentations provided an overview of the current situation of grasslands in each country. In all cases dramatic losses of grasslands have taken place fairly recently and ongoing habitat fragmentation is perceived as the main threat. One of the key results of this workshop was the elaboration of a shared vision. This vision emphasizes the need to protect grassland species through the conservation of their habitat. To achieve this vision, it will require an enhanced understanding of the current status and trends of grasslands throughout North America; the identification of areas of conservation and protection priority; addressing current grassland use practices, and the development of outreach efforts. Achieving success will require the participation of diverse stakeholders, especially the engagement of landowners. As part of the future steps it is needed to coordinate efforts with other grassland related conservation initiatives, such as Partners in Flight. Recently, in April 200l, the CEC presented the results of the workshop to the Canada/Mexico/United States Trilateral Committee For Wildlife and Ecosystem Conservation and Management, and its Executive Table endorsed that the CEC working group devise a strategy for achieving the vision established by the Chihuahua grasslands workshop.