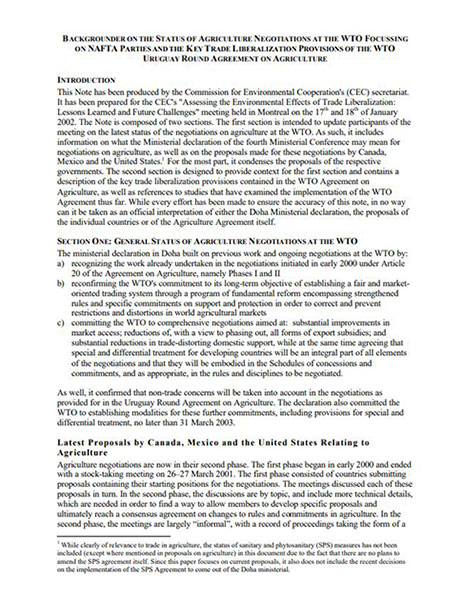 This Note has been produced by the Commission for Environmental Cooperation’s (CEC) secretariat. It has been prepared for the CEC’s “Assessing the Environmental Effects of Trade Liberalization: Lessons Learned and Future Challenges” meeting held in Montreal on the 17–18 January 2002. The Note is composed of two sections.

The first section is intended to update participants of the meeting on the latest status of the negotiations on agriculture at the WTO. As such, it includes information on what the Ministerial declaration of the fourth Ministerial Conference may mean for negotiations on agriculture, as well as on the proposals made for these negotiations by Canada, Mexico and the United States. For the most part, it condenses the proposals of the respective governments. The second section is designed to provide context for the first section and contains a description of the key trade liberalization provisions contained in the WTO Agreement on Agriculture, as well as references to studies that have examined the implementation of the WTO Agreement thus far. While every effort has been made to ensure the accuracy of this note, in no way can it be taken as an official interpretation of either the Doha Ministerial declaration, the proposals of the individual countries or of the Agriculture Agreement itself.