Assessing Barriers and Opportunities for Renewable Energy in North America 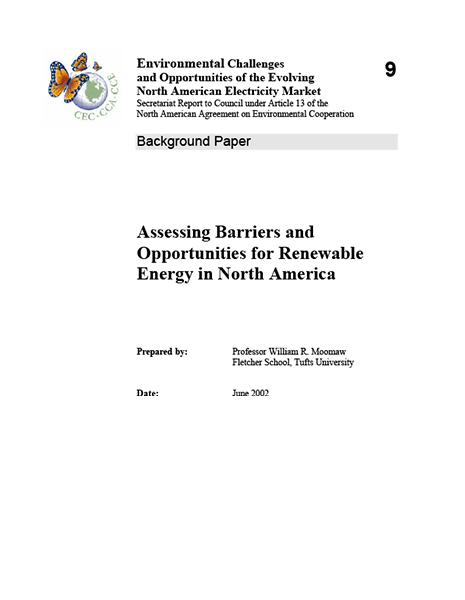 Assessing Barriers and Opportunities for Renewable Energy in North America

Renewable energy can contribute substantially to the entire North American electricity supply, to biomass based transport fuels and for space and hot water heating in buildings and industry. Both distributed forms of renewable energy and central large-scale technology options are possible. The manufacturing, installation and maintenance of renewable technology can create substantial employment opportunities for North America. Both wind and biomass fuels could contribute in a major way to enhancing rural economic development in all three countries.

Worldwide, the rates of growth of wind and solar energy are the most rapid of any technology. Wind power installations have been doubling every three years between 1994 and 2001, and now total over 23,000 MW. (Brown, 2002, Sawin, 2001). Likewise photovoltaic shipments have been doubling at a comparable rate between 1996 and 2001, and now approach 400 MWp. These growth rates are from a small base, but vastly exceed any other form of energy technology. Unfortunately, North America has a declining share of this accelerating market in renewable technology.