Río Bravo Restoration is a non-profit that is passionate about improving ecosystems and working with a diverse group of public and private organizations to foster stewardship and build capacity for conservation work. 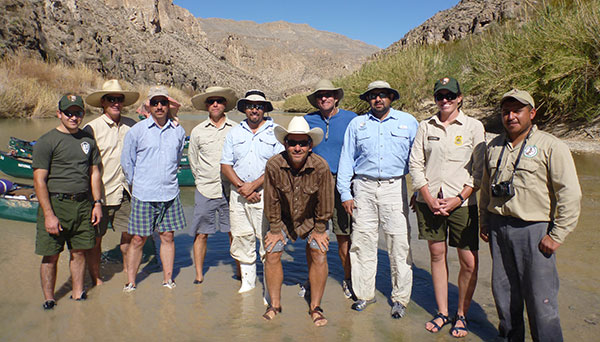 Over the last century, the hydroecologic condition of the Rio Grande/Río Bravo reach along the US-Mexico border has dramatically declined, negatively affecting a plethora of native species as well as the ecosystem services the river provides local citizens. The impacts of climate change are exacerbating this decline as well as threatening the socioeconomic status and community health of the towns of this remote region. Although a concerted binational restoration response over the last two decades has accomplished much to bring the river back, efforts to date to involve local citizens in climate adaptation and river restoration efforts have been introductory and sporadic. To address this limitation, this project will focus on training citizens from several towns in this remote region to be a skilled and employable labor force for both implementing restoration actions as well as designing and installing climate-adapted community and household green infrastructure.

The project has three central goals, which are to: (i) train and involve citizens (both men and women) in the implementation of on-the-ground river and upland restoration actions along the Rio Bravo; (ii) train and involve mostly women citizens from several towns in the region in the design and installation of community and household green infrastructure; and (iii) increase awareness and capacity of citizens from several towns in the region to address a variety of socioeconomic and environmental challenges that face their communities in the context of a rapidly changing climate.

The establishment of a core group of skilled and trained community citizens (with emphasis on women citizens) who can be hired in the future by Conanp, local NGOs, and other binational partners to implement river restoration actions and to design and install community and household green infrastructure.