Rural Schools in the Texcoco Mountain Zone, Toward Sustainability 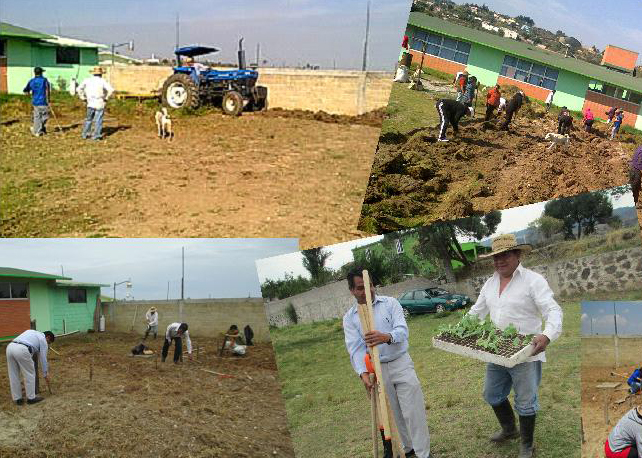 This project is primarily intended to foster environmental education, in theory and practice, as a complement to a complete education, since schools currently address the issue only superficially.

The disproportionate use of natural resources and their byproducts in homes and schools, primarily water and electricity, has been passed on to new generations, as school-age children have little or no moderation when using such resources.

Two factors that aggravate this problem are the low monetary price of water in the region, which leads to wastefulness and thus scarcity in dry periods, and the high price of electrical power, as current utility regulations and collections have had a serious economic impact on the region’s population and educational institutions.

Lastly, due in part to social evolution, globalization and consumerism, a good part of the population is affected by childhood obesity, malnutrition and diabetes, among other illnesses directly linked to (poor) diet. This is also due to the transformation of farmland into residential developments and to an ever-increasing dependency on frozen, processed foods and meats of low nutritional quality.

To combat this, the project seeks to awaken and sow interest among students and parents in the protection, conservation and rational use of natural resources, through the use of innovative ecotechnologies and practices in their management. At the same time, it seeks to teach the school community (including teachers and parents) to produce their own food (fruits and vegetables) to promote a healthy lifestyle and proper eating habits, thereby improving the quality of life of the population as a whole. The project also addresses and balances three key factors: the social, environmental and economic issues that together guide the sustainability project.

The project is further intended to be used as a model and be reproduced in the future throughout the Texcoco mountain zone, where indigenous communities interested and concerned about protecting the environment—and more importantly, about future generations—are currently settled, but that do not have the necessary economic and technical resources.

To install three photovoltaic systems to produce a nominal total of 600 KWh per month, to reduce the current economic impact of electric bills; and construct a system of rainwater catchment and storage, projected to yield an annual total of 500 m3 of water (total for the three schools), to counter shortages during the dry season. The water would also be used in toilets and in the school vegetable gardens, totaling 400 m2, which will be built as part of the project. These gardens will ensure healthier eating for the schoolchildren and also generate interest among the families of the children in producing part of their own food. Each element will be done at three schools: one middle school, one indigenous primary school, and one indigenous preschool.

A set of prefabricated photovoltaic panels will be installed and hooked up on the school roofs, under a special contract with the Federal Electricity Commission (Comisión Federal de Electricidad—CFE) to connect the system to the public grid. This will allow each school to use the electrical power it generates to go largely “off the grid.” To collect and channel rainwater, brick edging will be placed around untiled roofs, and tiled roofs will have an aluminum gutter installed to direct the prefiltered water through PVC pipe to an aboveground, dedicated storage tank. The work of constructing the gardens will be allocated by grade (age), and include planting beds, composting, and constructing wooden work tables, walkways, signage and fencing. Students, parents and staff at each school will participate in building the garden, preparing the soil, and composting, as well as planting, transplanting, maintenance and harvesting.

For the photovoltaic system and rainwater catchment, training will be given on the operation and maintenance of the systems and detecting the most common problems. For the school gardens, training and oversight will be offered for half a year on the different stages of garden creation and then, during the next six months, the advice necessary will be provided to enable the garden to be operated independently by the schools.

The project at the three schools, once implemented, is projected to yield a savings of more than 50% in electricity costs, supply more than 50% of current water consumption from the rainwater catchment system, and engender increased interaction between the school communities and the local population through shared activities and information related to working the vegetable gardens and applying the “ecotechniques” at each school.

Once students and parents see the benefits of the techniques and technologies taught and applied in this project, they will be convinced that the “cheaper” way is the right way, in economics, health and environmental terms, and will be motivated to pass them along and put them into practice, to the extent possible.

Overall, these results will have the positive effect of reducing the ecological footprint of the school population: putting less demand on the local water table, reducing the use of nonrenewable sources of electricity, and improving the quality of food for the students.

The project will also document the experiences for further deploying this project (in the near future), including any alterations and additions, in the rest of the locations (or schools) in the mountainous zone of western Mexico State. These actions will foster a less consumptive-, more preservation-oriented awareness of ancestral knowledge (farm practices), and the use of new technologies that reduce the population’s ecological footprint.