This map is an image of nighttime lights of North America, including the Caribbean and Mexico.

The data were collected in 1996 and 1997 as part of the Defense Meteorological Satellite Program (DMSP) of the United States.

The Defense Meteorological Satellite Program (DMSP) satellites collect visible and infrared cloud imagery as well as monitoring the atmospheric, oceanographic, hydrologic, cryospheric and near-Earth space environments.  The DMSP program maintains a constellation of two, sun-synchronous, near-polar orbiting satellites.  The orbital period is 101 minutes and inclination is 99 degrees.  The atmospheric and oceanographic sensors record radiances at visible, infrared and microwave wavelengths.  The solar-geophysical sensors measure ionospheric plasma fluxes, densities, temperatures and velocities. This image was created during the periods 16-21 March, 1996, 5-14 January, 1997, and 3-12 February,1997, when the gain on the OLS sensor was turned down to 24 from the normal 64 decibels so that the urban centers did not saturate the signal.

The data were compiled by the National Atlas of the United States. This is a revised version of the May 2002 map layer, with a corrected shoreline for Greenland. 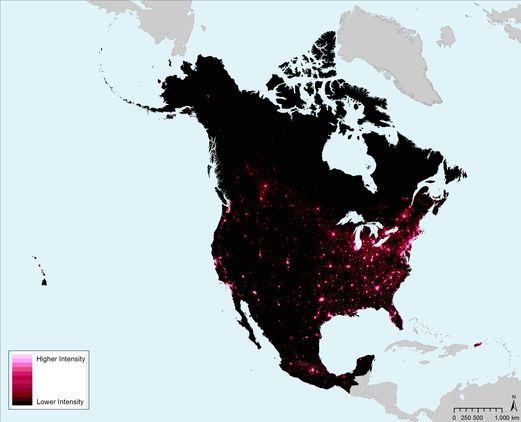