The well being of birds in any one of the countries of North America depends on conditions in all three. As David Pashley describes, NABCI is on the right track in its efforts to pool talent and resources across Canada, Mexico and the United States in a cohesive continent-wide strategy to save the birds.

The North American Bird Conservation Initiative (NABCI), facilitated by CEC, is an endeavor to increase the effectiveness of bird conservation in Canada, Mexico and the United States. A lot of people are interested in birds, as striking, active components of the natural world, as game species, as critical elements in ecosystem health. This interest has developed into concern in the face of alarming declines in the populations of many birds, and the result of that concern has been a plethora of organizations, agencies, companies, and individuals dedicated to bird conservation. NABCI creates an opportunity for these various entities to interact and cooperate.

Why is increased cooperation so important? It’s because the ever increasing pressures to which humans are exposing our lands and waters pose such a complex array of challenges over so vast a territory that it will take all the talent and resources we can muster across the continent to make meaningful progress. Over 1,100 species of birds regularly inhabit these three countries and each one has a unique and complex set of habitat needs. Some of these species are thriving along with increasing human-induced changes, but many more seem to be faring poorly. Even the simple step of determining which birds are under the most pressure and where this is occurring is hugely complicated. Assessing population trends of this many species, most of which are extraordinarily difficult to count, over many thousands of square kilometers, is a great scientific challenge. Nevertheless, although much is still poorly understood, it is clear that many of the birds with which we share our continent are in trouble. The well being of many bird species in any one country depends on environmental conditions in two or more countries.

How do we deal with these problems, and what can we do to help stabilize or recover populations? Some answers are simple-healthy wetlands, grasslands, forest, and other habitats are much better for birds than are subdivisions or rowcrops. Land that is superficially good for birds, however, is not always in perfect condition, in that we have to learn how to manage processes such as fire and flood that are required to maintain the dynamic ecosystems needed by many birds. We also have to stem the invasion of aggressive exotic plants and animals that threaten ecosystem stability. Also, lands managed or protected for wildlife are only a small part of the picture. We have to learn how the needs of birds can be compatible with the forestry, grazing, and agricultural forces that dominate such a huge percentage of our continent, and work with land managers to implement bird-friendly practices.

In short, bird conservation involves nothing less than the following:

Are there any more questions why those of us committed to bird conservation ought to pool resources and cooperate with each other? The North American Bird Conservation Initiative is the best idea yet as to how to accomplish this challenge. Stay tuned to its progress. 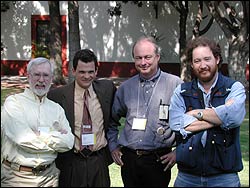