Mayors across the United States, Mexico and Canada Take the Mayors’ Monarch Pledge

This article originally appeared on the National Wildlife Federation Blog

In September 2015, the National Wildlife Federation launched the Mayors’ Monarch Pledge in in an effort to engage cities, towns, counties and communities of all kinds to join the effort to help save the Monarch butterfly.  Mayor Francis Slay of St. Louis, Missouri proudly became the first to take the pledge, followed soon thereafter by Mayor Steve Adler of Austin, TX.

While the pledge was originally designed for U.S. municipalities, the U.S. Fish and Wildlife Service and Commission for Environmental Cooperation suggested expanding the pledge to Canada and Mexico, and invited the Federation to join a series of tri-lateral discussions that took place in 2016 in Monterrey, Mexico; Shepherdstown, West Virginia in the United States, and Ottawa, Canada.

Trilateral collaboration is critical for a species like the monarch butterfly whose eastern population’s (east of the continental divide) intergenerational migration spans all three countries.  Monarch butterflies “overwinter” in the oyamel fir forests of the Sierra Madre Mountains west of Mexico City.  In the spring they head north, mate and lay eggs on milkweed in the northern states of Coahuila, Nuevo Leon and Tamaulipas in Mexico and Texas in the U.S.  Four additional generations will spread north all across the northern United States and southern Canada.  All three countries play a critical role in saving the monarch butterfly!

In March of 2017 the CEC brought together community leaders from across Canada, Mexico and the United States in San Antonio, Texas to share about existing monarch butterfly conservation efforts and explore the possibility of officially expanding the pledge to Canada and Mexico.

The David Suzuki Foundation in Canada and Profauna and its Programa Correo Real Mariposa Monarca in Mexico agreed to be the lead sponsor for the pledge in their respective countries.  As of March 2017, seven municipalities in Canada had taken the pledge and the mayor of the municipality of Saltillo, Coahuila, Mexico, Ing. Isidro López Villarreal, had become the first mayor to take the pledge in Mexico.

Learn more about the tri-national Mayors’ Monarch Pledge at www.nwf.org/mayorsmonarchpledge. 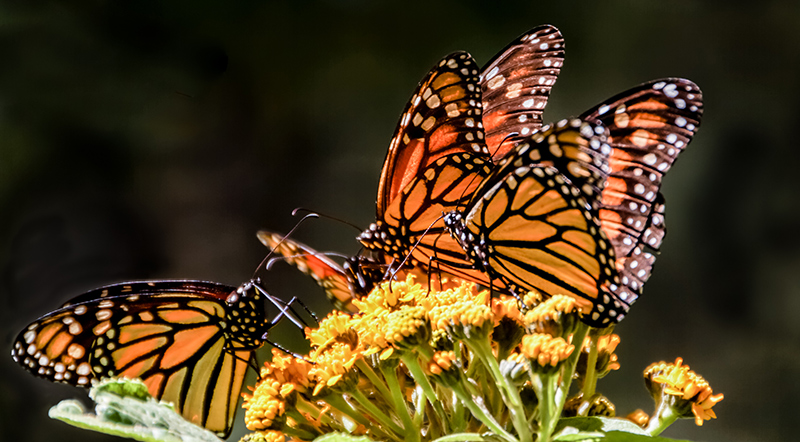