Montreal, 27 September 2018—The Commission for Environmental Cooperation (CEC) is pleased to announce the results of the second annual Trinational Monarch Monitoring Blitz (the Blitz), and thanks the hundreds of citizen scientists across North America who gathered critical data over a week-long period to support monarch butterfly conservation.

Between July 28 and August 5, 486 citizen scientists from Canada, Mexico and the United States recorded 13,796 monarchs at various stages of their life cycle, from eggs to full-fledged butterflies, and monitored 53,588 milkweed plants while looking for monarch eggs and caterpillars. Compared to last year, we had almost twice the number of participants! More participation resulted in a significant increase in the data received. Thus this year twice as many caterpillars were recorded and more milkweeds were monitored than in the previous year.

The Trinational Monarch Monitoring Blitz is an exciting new citizen science initiative that brings people together to gather data that will help scientists draw a better picture of peak summer monarch breeding populations across North America, as well as the distribution of milkweed plants, the only food source for monarch caterpillars.

“The monarch butterfly’s population has been studied in its overwintering grounds in Mexico since 1992, but we lack a snapshot for the summer range, when monarchs are scattered across the continent,” said André-Phillippe Drapeau Picard from the Montréal Insectarium/Space for Life, one of the initiative’s leading organizations. “By holding the Monarch Blitz annually, we can accumulate data that will help us determine breeding hotspots and understand summer population dynamics. Those results will inform conservation plans to better protect the monarch butterfly, as well as the many species, including other pollinators and endangered species, that rely on similar habitats across the continent for their survival.”

The North American Monarch Butterfly is an iconic and fascinating species with one of the longest insect migrations on the planet: the journey spans four generations traveling over thousands of kilometres! Monarch butterfly conservation requires cooperative efforts by Canada, Mexico and the United States, and has become emblematic of this type of work.

The Monarch Blitz is made possible through the Trinational Monarch Conservation Partnership, created through the Commission for Environmental Cooperation, and composed of Montréal Insectarium/Space for Life, Environment and Climate Change Canada (ECCC), Monarch Joint Venture (MJV), the US Fish and Wildlife Service (USFWS), and Mexico’s Comisión Nacional de Áreas Naturales Protegidas (Conanp).

For more information on this year’s results and plans for the 2019 Blitz, visit the Mission Monarch and Monarch Larva Monitoring Project websites in Canada and the United States, and the iNaturalista website in Mexico. Search for Blitz-related activities on social media using the hashtag #MissionMonarch. 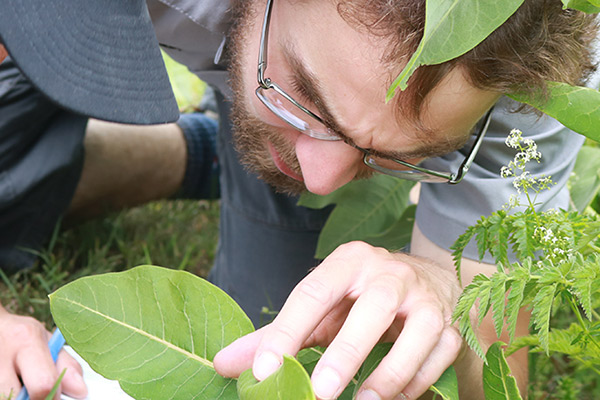