Montreal, 17 July 2019—Join hundreds of volunteers in Canada, Mexico and the United States, from 27 July to 4 August, for the 2019 International Monarch Monitoring Blitz (the Blitz) and be part of this regional initiative to help conserve the monarch butterfly. By participating, you can help monarch experts gain more information to understand the distribution of the migratory monarch butterfly in North America.

“Observations from the public can help scientists gain valuable information that will support regional efforts to protect the monarch butterfly and its habitat all along its migratory flyways,” said André-Philippe Drapeau Picard, Mission Monarch coordinator at the Insectarium/Montréal Space for Life.

For one week, the Blitz invites people across North America to go out to gardens, parks and green areas and monitor milkweed plants for monarch eggs, caterpillars, chrysalises and butterflies. This information will help researchers identify priority areas for monarch conservation actions. Data gathered during the Blitz will be uploaded to the Trinational Monarch Knowledge Network, where they will be accessible for anyone to consult and download.

To take part in the Blitz, go to Mission Monarch page if you are in Canada. If you are east of the Rocky Mountains in the United States, follow the Monarch Larva Monitoring Project link, and if you are west of the Rocky Mountains, use the link for the Western Monarch and Milkweed Mapper. In Mexico, you can go to Naturalista. Or, simply follow the Blitz on social media, using the hashtag #MonarchBlitz.

Monarch butterfly overwintering sites were first recorded by scientists in California over 200 years ago and in Mexico in 1975. Since then, the monarch has become an emblematic species for North America. After an alarming decrease in its populations over the last 20 years, the eastern monarch population overwintering in central Mexico showed a significant increase this past winter. However, the population is still well below historic levels, which inspires questions about what conservation efforts are needed to continue this positive trend.

Meanwhile, the western monarch overwintering population along coastal California hit an all-time low this winter, with less than 1% of the historic population size remaining. Public participation in community science in the West is more important than ever to help understand and reverse this population’s dramatic decline.

“The majestic monarch butterfly, a flagship North American pollinator and symbol of international cooperation, needs your help with its spectacular annual migration across the continent. Join us by contributing to the International Monarch Monitoring Blitz,” says Cora Lund Preston, Communications Specialist at the Monarch Joint Venture.

The Blitz is an initiative of the Trinational Monarch Conservation Science Partnership, created through the Commission for Environmental Cooperation (CEC). Through the Blitz, scientists from the Insectarium/Montréal Space for Life, Environment and Climate Change Canada (ECCC), Monarch Joint Venture, Journey North, the US Fish and Wildlife Service, the Xerces Society for Invertebrate Conservation, and Mexico’s Comisión Nacional de Áreas Naturales Protegidas(Conanp) are asking the public to help them understand monarch and milkweed distribution throughout North America.

FACTS ABOUT THE 2018 MONARCH BLITZ

The National Commission of Natural Protected Areas (Conanp) is an agency of the federal government of Mexico in charge of the administration of the protected natural areas. @GobiernoMX

US Fish and Wildlife Service

The US Fish and Wildlife Service is a leader in fish and wildlife conservation, known for its scientific excellence, stewardship of lands and natural resources. @USFWS

The Space for Life’s Insectarium is the largest museum in North America entirely dedicated to insects, immersing humans into the insect universe. @EspacePourLaVie

The Monarch Joint Venture is a partnership of organizations working together to conserve the monarch migration for future generations. Journey North

Journey North is an international citizen science project of the University of Wisconsin-Madison Arboretum that engages citizen scientists in a global study of wildlife migration and seasonal change. @journeynorth.org

The Xerces Society is a nonprofit organization that protects the natural world by conserving invertebrates and their habitat. @xercessociety 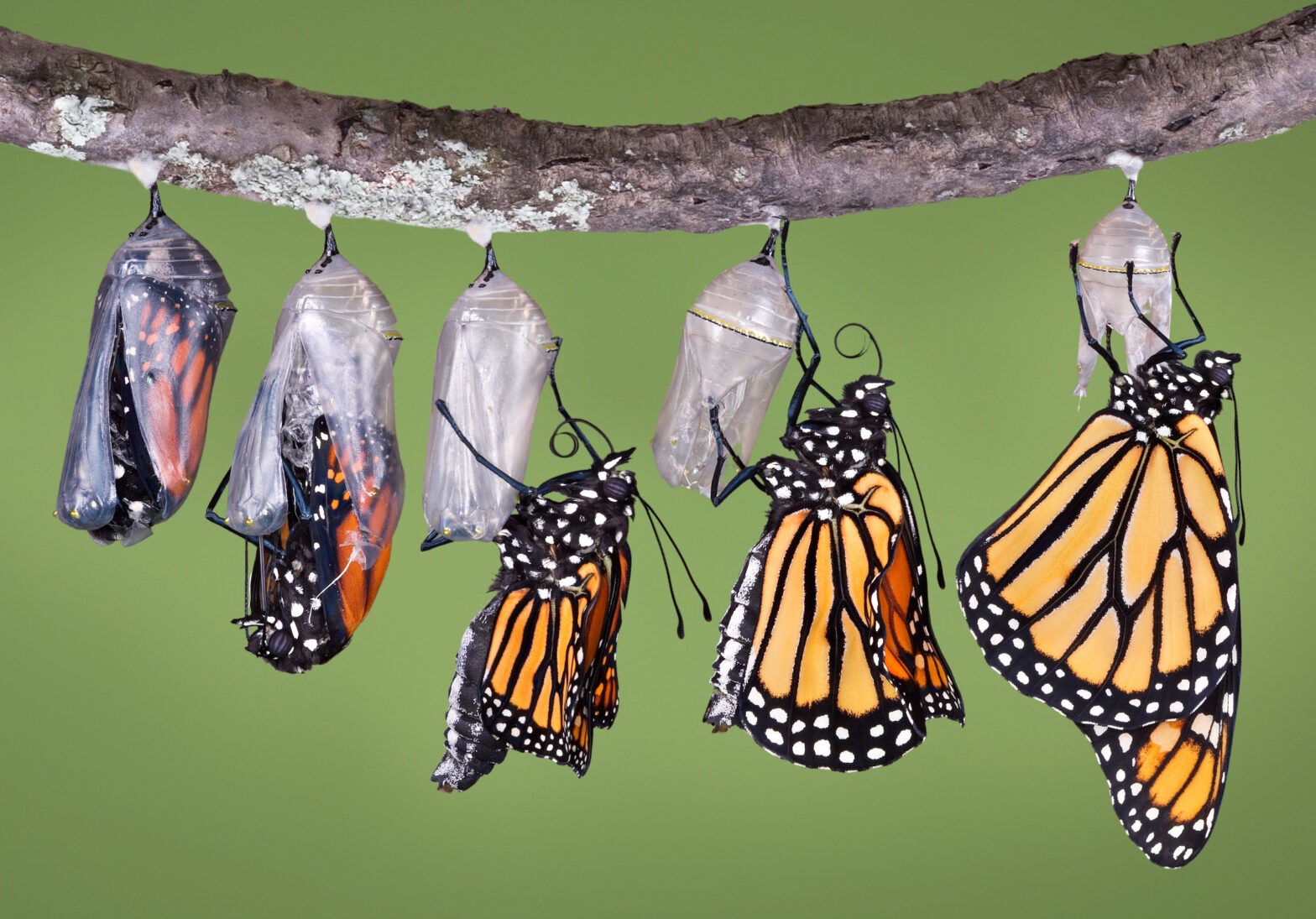 A composite of five different views of a monarch emerging from its chrysalis. It shows the emerging monarch from the first opening of the chrysalis to the final unfolding and drying of its wings. The butterfly starts its emergence upside down and has to grab the chrysalis tightly with its legs and right itself.