Three Countries, One Environment: Canada, Mexico and the US Announce Details of New North American Climate Adaptation Initiative at COP27

Representatives of Canada, Mexico and the United States, along with Felicia Marcus, a member of the CEC’s Joint Public Advisory Committee and a water rights activist currently at Stanford University, and Indigenous leader and CEC collaborator Kerry-Ann Charles of the Chippewas of Georgina Island First Nation, came together at Canada’s COP27 Pavilion to celebrate nearly three decades of regional environmental cooperation through the CEC and accelerate the pace of climate action across North America.

The announcement was made by CEC Executive Director Jorge Daniel Taillant at a side event at the COP27 UN climate conference in Sharm el-Sheikh Egypt, showcasing how Canada, Mexico and the United States are working regionally on environmental protection, including on efforts to advance more effective climate adaptation solutions that engage and incorporate Indigenous knowledge and promote environmental justice.

Climate adaptation, particularly for the most vulnerable and underserved, alongside effective mitigation of the most potent greenhouse gases, is a priority for Canada, Mexico and the United States. Responding to this priority, last November, at the North American Leaders Summit, the three countries announced plans to work collectively through the CEC to develop a continent-wide climate adaptation initiative aimed at improving early warning systems for extreme events and promoting other climate adaptation solutions. In July of this year at the CEC’s annual Council Session, the Governments reaffirmed the urgent need to tackle the devastating effects that climate change poses to the well-being of the region’s most climate vulnerable communities and committed C$1 million for the joint initiative.

Through the regional coordination of environmental stewardship efforts and collaborative actions on climate, Canada, Mexico and the United States are working to foster greater climate resilience, to increase community preparedness and to build local and national capacity to respond to extreme events. The region’s efforts to advance actions on climate adaptation is a priority for the nearly 500 million North Americans who are confronting an escalating climate crisis, and is of great relevance for North America’s most climate-vulnerable and underserved communities.

Quotes
“In Canada, across North America, and throughout the world, we are already experiencing the devastating impacts of climate change, including extreme heat, sea level rise, severe weather events, prolonged droughts, intense flooding, disastrous wildfires and coastal erosion. This is a critical decade for ambitious climate action as we race against the clock to keep the goal of holding global warming to 1.5°C while also deploying integrated solutions that address our biodiversity crisis. As we look to avoid the worst impacts of climate change and conserve and protect nature, partnering with Indigenous Nations and elevating Indigenous voices and traditional ecological knowledge are vital components of our domestic and regional strategy.”
—Steven Guilbeault, Minister of Environment and Climate Change Canada

“We are at a crucial juncture in human history, with no time to waste. We must act urgently to slow global warming before irreversible tipping points are breached and catastrophic climate chaos deepens beyond repair. And we must do this while addressing and prioritizing the needs of those suffering the most severe impacts of climate change. Fast, aggressive, and effective short-term actions to reduce the most intense climate pollutants like methane, black carbon and other super pollutants alongside decarbonization strategies are essential, as are adaptation strategies that can avoid and reduce the impacts of to the most climate vulnerable. We must all do everything in our power to secure a cooler climate, in which nature thrives, and where present and future generations can live more comfortably, more sustainably and more equitably. The time to act is now.”
—Jorge Daniel Taillant, Commission for Environmental Cooperation Executive Director 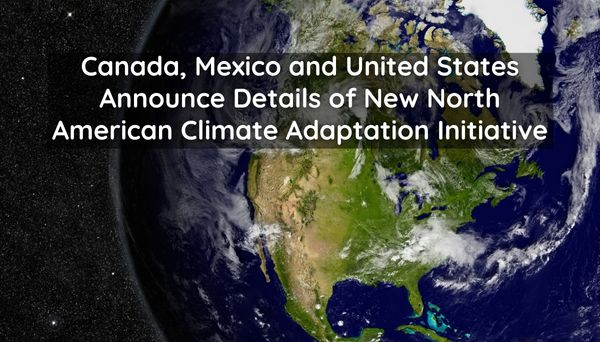