Celebrate the 5th International Monarch Monitoring Blitz by Participating All Across North America!

Montreal, 9 July 2021—In the last four editions of the year’s annual International Monarch Monitoring Blitz (the Blitz), thousands of volunteers in Canada, Mexico and the United States joined efforts to gather over 4,000 observations of monarchs and milkweeds! Let’s continue this remarkable effort and share as many observations as we can from July 23 to August 1, 2021.

For 10 days, the Blitz invites people across North America to look for milkweed plants and survey them for monarch eggs, caterpillars, chrysalises and butterflies. This information will help researchers identify priority areas for monarch conservation actions. Data gathered during the Blitz is uploaded to the Trinational Monarch Knowledge Network, where it is accessible for anyone to consult and download.

Every observation shared helps the scientific community conserve the monarch butterfly along its migratory routes. “The western migratory population is at an all-time low, so every observation of a monarch is incredibly valuable this year,” says Emma Pelton, Senior Conservation Biologist at the Xerces Society for Invertebrate Conservation.

The yearly snapshots of monarch and milkweed abundance help us better understand the dynamic between the summer generations and their breeding habitat. Since both monarchs and milkweed are found across North America during the time of the Blitz, we absolutely need the public’s help during this special week.

“Data obtained over a long period of time are essential for performing trend analysis. It is therefore crucial that we continue documenting the monarch summer breeding population each year to better understand how and why it fluctuates over time,” says Nancy Sheehan, Journey North Program Coordinator, UW-Madison Arboretum.

To take part in the Blitz, simply share your observations on one of the participating community science programs.

Go to Mission Monarch if you are in Canada. If you are east of the Rocky Mountains in the United States, submit your observations to the Monarch Larva Monitoring Project, and if you are west of the Rocky Mountains, use the Western Monarch and Milkweed Mapper. In Mexico, submit your data to Naturalista. For the entire North American region, submit your data to Journey North. Don’t forget to follow the Blitz on social media using the hashtag #MonarchBlitz and be proud to mention your participation in this international conservation effort!

We remind you that your well-being and that of those around you comes first. Before participating in any activities, please know and carefully follow the health and safety measures for COVID-19 recommended by the authorities in your region.

The Blitz is an initiative of the Trinational Monarch Conservation Science Partnership, created through the CEC. Through the Blitz, scientists from the Insectarium/Montréal Space for Life, Environment and Climate Change Canada (ECCC), Monarch Joint Venture, Journey North, the US Fish and Wildlife Service, the Xerces Society for Invertebrate Conservation, and Mexico’s Comisión Nacional de Áreas Naturales Protegidas (Conanp) are asking the public to help them understand monarch and milkweed distribution throughout North America.

Monarch butterfly overwintering sites were first recorded by scientists in California over 200 years ago and in Mexico in 1975. Since then, the monarch has become an emblematic species for North America.

After an alarming decrease in its populations over the last 20 years, the eastern monarch population overwintering in central Mexico showed a significant increase in 2018. However, the population suffered consecutive drops in the past two years (53% in 2019 and 26% in 2020, compared to previous years), remaining well below historic levels. Conservation efforts are still needed to attain a positive trend.

Meanwhile, the western monarch population, which breeds west of the Rocky Mountains and overwinters on the California Coast, is closer to extinction as only 1,914 monarchs were reported during the last Western Monarch Thanksgiving Count (a shocking 99.9% decline since the 1980s). Public participation in community science programs on the West Coast is more important than ever to help understand and reverse this population’s dramatic decline.

FACTS ABOUT THE MONARCH BLITZ

Community science, also called citizen science and participatory science, is the process by which non-scientists contribute actively and voluntarily to research projects.

Here are some facts about the last four editions of the International Monarch Blitz, a community science initiative: 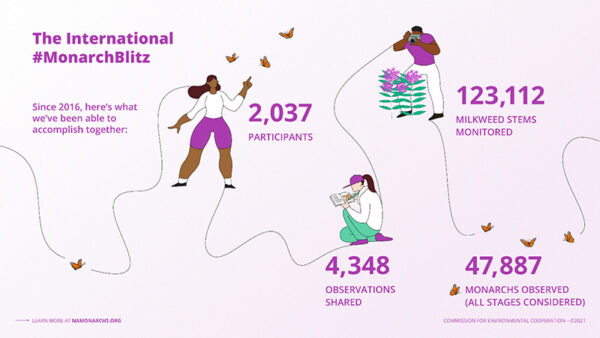 Comisión Nacional de Áreas Naturales Protegidas
The National Commission of Natural Protected Areas (Conanp) is an agency of the federal government of Mexico in charge of the administration of the protected natural areas. @GobiernoMX

Journey North
Journey North is an international citizen science project of the University of Wisconsin-Madison Arboretum that engages citizen scientists in a global study of wildlife migration and seasonal change. @journeynorthorg 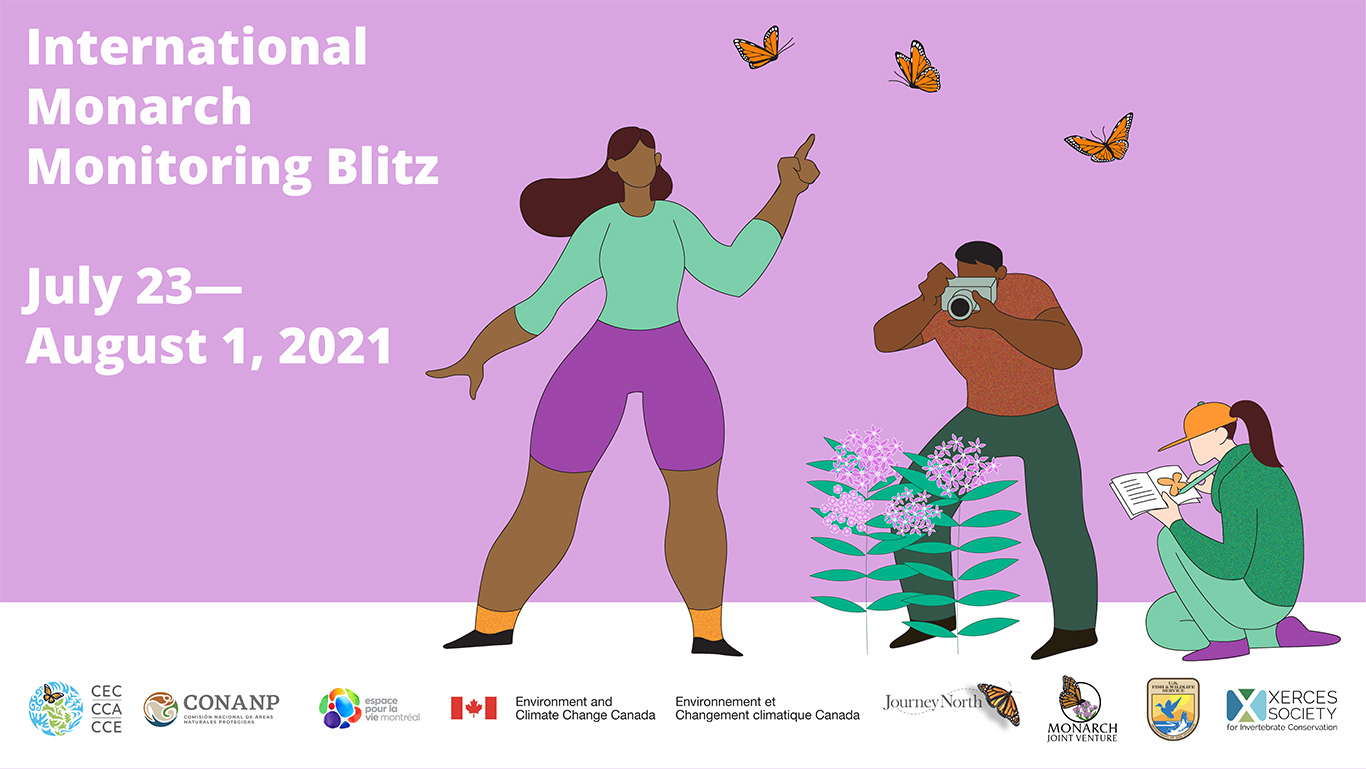