Montreal, 28 November 2017—The Commission for Environmental Cooperation (CEC) is a unique catalyst for environmental cooperative action at the North American and international levels, the Joint Public Advisory Committee (JPAC) of the CEC heard on 9 November at the committee’s last session of 2017.

“With renegotiation of the North American Free Trade Agreement (NAFTA) underway, it is vital to recognize the importance of the CEC as an institution that fulfills a unique role in promoting cooperation on sustainable development and environmental improvement across North America” said Robert Varney, JPAC chair, who hosted the public meeting in Chicago, Illinois.

The JPAC forum focused on the role of NAFTA’s environmental side agreement—the North American Agreement on Environmental Cooperation (NAAEC)—and the CEC in advancing the North American environmental agenda. Participants who convened in-person and via Facebook live and webcast had the opportunity to exchange with JPAC members and leading experts in trade and environment from government, nongovernmental organizations, and academia.

JPAC is composed of 15 volunteer citizens, five from each country. It advises the Council—cabinet-level environment ministers from Canada, Mexico and the United States—and ensures public participation, openness and transparency in the actions of the CEC.

At the JPAC meeting, experts stressed the need to ensure the longevity of CEC’s body of knowledge and tools, such as publications currently available in the CEC’s Virtual Library, the North American Environmental Atlas, and Taking Stock Online.

Other recommendations stemming from the public forum include:

More information on JPAC can be found at: www.cec.org/JPAC. 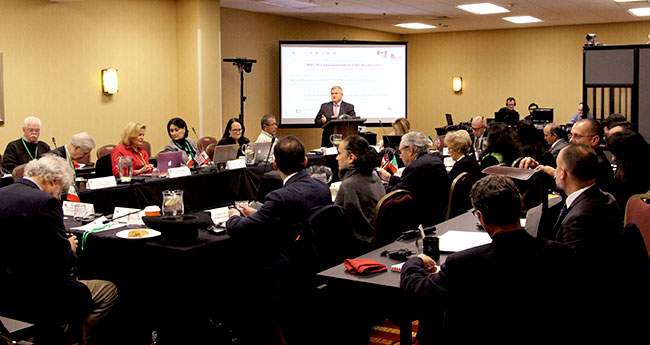