Ensenada, 17 May 2017—Today, at the annual meeting of the Canada/Mexico/US Trilateral Committee for Wildlife and Ecosystem Conservation and Management, the Commission for Environmental Cooperation (CEC) released action plans for five priority North American species’ groups listed under Appendix II of the Convention on International Trade in Endangered Species of Wild Fauna and Flora (CITES), an international treaty that regulates trade in wildlife.

The action plans were developed in partnership with the United States Fish and Wildlife Service, Environment and Climate Change Canada, and Mexico’s Comisión Nacional para el Conocimiento y Uso de la Biodiversidad (Conabio), and list 89 actions that government, the private sector, civil society, and academia can take to support sustainability of trade in parrots, sharks, tarantulas, timber, and turtles and tortoises. Built on comprehensive reviews and multi-stakeholder consultations held in 2016 and 2017, the reports seek to provide big-picture analyses of the impact of trade in these species in North America, including breeding practices and livelihoods, conservation efforts, national regulatory frameworks, and market drivers.

“Effective conservation requires collaboration between breeders, retailers, enforcement agencies and conservation specialists. The CEC is pleased to have brought these groups to the table. Together, we have identified solutions and created a blueprint for joint action to promote sustainable trade in these animals,” said César Rafael Chávez, CEC Executive Director.

Links to each action plan are provided below, along with an overview of trade and conservation considerations for each species:

Parrots comprise one of the most endangered groups of birds in the world, and the market for live parrots as pets continues to increase. Despite a law in Mexico that prohibits the sale and trade of offspring of captive specimens and the collection of wild specimens, the illegal capture of parrots from the wild for domestic trade is widespread. In addition to a population decline in parrots, invasive non-native parrot species have become established in Mexico and are likely to cause ecological problems by competing with native species. The action plan calls for improved in-situ conservation of wild populations and enforcement capacity, and reduced threat from introduced invasive species in Mexico.

Like the majority of shark species worldwide, the eight priority shark species identified in this action plan are extremely vulnerable to over-exploitation and have seen their global populations decrease. Sharks are primarily traded as parts, pieces and derivatives—including meat, fins, teeth, jaws—and as ingredients in health supplements and pharmaceuticals. North American cooperation takes place through regional fisheries management organizations (RFMOs); however, reliable biological and catch data represent a challenge. The action plan calls for improved capacity for monitoring and reporting by the fishing sector, improved capacity for identification of shark parts and enforcement, increased public awareness of conservation and regulation, and improved management of Mexican fisheries.

The collection and production of turtles and tortoises worldwide serves a variety of trade and consumer demands, including use as pets, for consumption, for medicinal and educational purposes, and to supply breeding and rearing farms and facilities. Turtle management and trade vary greatly throughout North America and across turtle species, from large-scale captive breeding and collection of wild specimens in the United States, to limited commercialization in Mexico and Canada. The captive breeding of the Central American river turtle (Dermatemys mawii) in Mexico offers the potential for sustainable and economically valuable turtle production that also benefits conservation. The action plan calls for increased research on captive husbandry of D. mawii for commercial purpose, improved policy and procedures that also promote recovery of wild populations, and increased enforcement and protection capacity.

The eight kinds of trees and cacti in this action plan are found in Mexico and in the United States. Big-leaf mahogany is by far the most commercially valuable species and has had a long history of over-exploitation. Many of the other priority species are thought to be threatened, not only by logging but also by habitat loss to cattle ranching and slash-and-burn agriculture. One challenge for border enforcement officers is the difficulty of visually identifying and distinguishing the wood of CITES-listed species from the many other non-CITES species that are in international trade. The action plan calls for increased field research and analysis, sustainable production of rosewood and mahogany species in Mexico, increased capacity for identification and enforcement, and increased community awareness about forest conservation in Mexico.

As the market for Brachypelma tarantulas is increasing worldwide, illegal trade is thought to far exceed the legal trade. In Mexico, wild Brachypelma populations are in decline, due to habitat loss and to large numbers being collected from the wild. However, the lack of available population data makes assessing the extent of impact that trade has on their survival difficult. The legal trade of priority tarantula species provides attractive economic opportunities for Mexican breeders. The action plan calls for developing policies that promote captive-breeding and sustainable trade in Mexico, increased biological and trade information, and improved conservation and enforcement capacity. 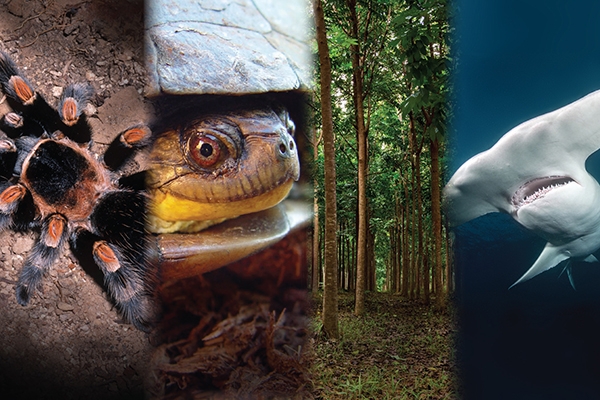