Eighteen projects were chosen from 500 proposals received as part of a new initiative announced 22 June 2011, at the CEC Council’s meeting held in Montreal. The successful projects span the ecoregions of North America and support environmental action at the community level from the subarctic tundra, to the grasslands of the Great Plains, to the tropical forests of Mexico. Projects address issues ranging from the effects of climate change on Woodland Caribou and the Athabaskan Peoples in Canada, to citizen-powered air quality testing in Louisiana and protecting the health of women and children through the adoption of better, clean energy cooking stoves in Mexico.

Council members called for proposals that would promote healthy communities and ecosystems, encourage activities that address climate change through the transition to a low-carbon economy, and advance projects that could assist in greening the economies of the three countries.

The 18 projects were selected based on their significance for addressing community and North American environmental issues, their technical or scientific approaches, their emphasis on promoting partnerships, and their plan to produce clear and tangible results. The projects represent a broad base of hands-on groups and organizations, representing tribal nations, indigenous peoples, community organizations, environmental groups, and academic institutions.

To find out more about NAPECA, including details about the winning projects, visit www.cec.org/napeca.

Follow the progress of the projects on the following websites and social media channels: 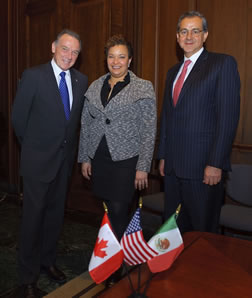