Janet Darcher (JD) is a retired public administrator for the State of Washington and led the Peninsula Quilt Guild for the Connecting People Through Shorebirds Friendship Quilt project. Ed Darcher (ED) is Pacific County Spartina Coordinator. They live in a rural town near Willapa Bay, WA—an internationally-recognized important shorebird site.

What can you tell us about where you live?

ED: Our home is in Naselle, about 20 miles from the Columbia River and 20 miles from the Pacific Ocean. We live on the Naselle River where it flows into Willapa Bay, which is the second-largest estuary on the Pacific Coast of the United States. We’ve lived here for 35 years but we’ve been involved with the bay for probably about 25 years.

What is your relationship to the Bay?

ED: I call Willapa Bay the best-kept secret on the West Coast. Willapa Bay produces about one-quarter of the nation’s oysters and the shoreline is still relatively undeveloped. There are virtually no motor boats. Oyster scours and people who have business on the bay are the only traffic you’ll see. We work on airboats out there. And it’s just a unique environment that I’ve really come to appreciate. My work is my play.

The Spartina program is probably the largest successful invasive aquatic weed control initiative in the United States. Ten years ago there were upwards of 8,000 acres of Spartina (or cordgrass) on the tidelands in Willapa Bay. Now it is estimated that there is less than an acre left. Had Spartina not been removed, the entire bay would have changed ecologically and probably no shorebirds would be there now.

Janet, how did you get involved in the “Connecting People Through Shorebirds” Friendship Quilt project?

JD: I was at a Guild meeting and one of the women there had been asked by the Willapa National Wildlife Refuge manager if we wanted to get involved with the Friendship Quilt project. I did not realize the scope of the project at the time. Working with these different refuges and wildlife facilities in three different countries, I just thought, “Wow!” And it involved working with kids, which I love. Between preparing and sewing the fabric squares that the youth had decorated, I imagine it took about 80 hours to make the quilt. Personally, I put in about 40 hours and it was fun!

What does the friendship quilt project mean to you?

JD: It’s a way of giving back and a way of showing appreciation for the work that’s going on—here and in all these other communities. In the last 25 years that Ed has been working on that bay, I’ve been able to see the change. My children were also involved in Washington State University projects out there. They worked for oyster companies, so it’s just what we did. And to pull it together at this point, and to explain it, I guess we were pretty involved in restoring the bay, but you don’t think about that at the time, you just do it. You just do what you can to take care of what you have so that it stays the way that you want it. I would like to see the bay maintained as a very natural environment. My involvement in the friendship quilt resulted from my appreciation of the fact that we live in this bucolic, idyllic area.

Willapa Bay was recently designated as a site of international importance by the Western Hemisphere Shorebird Reserve Network (WHSRN), joining a handful of other sites that are recognized as critical shorebird habitat along the North American Pacific flyway. What does this mean to you?

ED: The designation of Willapa Bay links us to other refuges and wetlands of importance. We are now part of a larger community, worldwide, whose purpose is to protect and maintain these shorebird populations. It’s not just our Willapa Bay, it is Willapa Bay connected to the rest of the world.

What has been your favorite part of being involved in the friendship quilt project?

ED: For me it was just the whole process: The quilt project linked people locally and internationally as part of a community which had a common interest—people who otherwise wouldn’t have known about each other—and that process culminated in this quilt that’s now traveling to various sites around the continent.

I was at the Willapa Bay WHSRN designation meeting where the completed quilt was shown for the first time. Everybody had the same reaction to the process and the final result: it generated energy—it was amazing!

JD: My favorite part is the fact that it involved so many different communities. I love what those kids did, it means so much to me. I’m just glad I had the opportunity to help pull it together.

Will you continue to be involved in shorebird conservation activities in Willapa Bay?

ED: My job is to preserve and restore wetlands to their original state by combatting and eliminating invasive weeds, and that naturally promotes shorebirds. And I’m going to continue doing that. I don’t ever see retiring out there.

JD: You know, Ed’s mom was a birder and knew quite a bit about it. She educated Ed in birds, Ed educated me, and we educated our children. We do a lot to educate ourselves about birdlife: it’s something we appreciate. I mean, who doesn’t like to go out to their backyard and hear birds?

As part of the Commission for Environmental Cooperation’s (CEC’s) project Arctic Migratory Birds Initiative (AMBI) – the Americas’ Flyway Action Plan, youth in 12 communities linked to seven important migratory shorebird sites along North America’s Atlantic and Pacific flyways, participated in the creation of the “Connecting People through Shorebirds” friendship quilt. The official inauguration of the quilt took place at the CEC’s 2017 Council Session on 27-28 June 2017, in Charlottetown, Prince Edward Island, Canada.

The CEC AMBI project also supported the designation of Willapa Bay and Long Beach Peninsula as a site of international importance under the Western Hemisphere Shorebird Reserve Network. 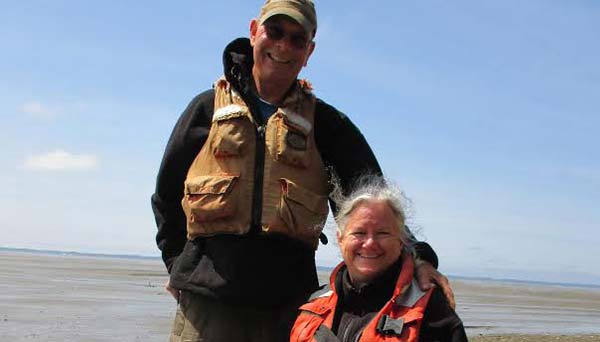