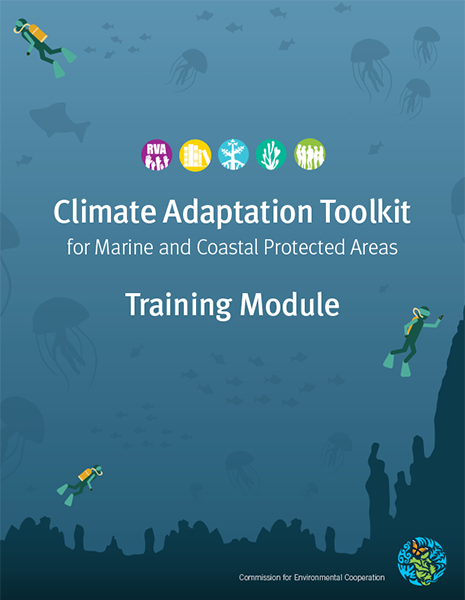 This document guides MPA practitioners through a basic climate adaptation planning process using the Climate Adaptation Toolkit. The Climate Adaptation Toolkit contains tools to help MPA practitioners evaluate the vulnerability of their sites to climate change and identify appropriate adaptation strategies. The Training Module provides a framework and training exercises to support the successful use […]

The Commission for Environmental Cooperation (CEC) recognized information gaps in estimating economic impacts of floods in Canada, Mexico, and the United States. It initiated in 2019 a collaborative research project, led by experts from the three countries. During 2019-2021, this project entitled “Costing Floods and Other Extreme Events” has brought together governmental agencies, academic institutions, […]

Developing a Comprehensive Methodology for Evaluating Economic Impacts of Floods in Canada, Mexico and the United States

Assessing the true economic costs of floods is central to our ability to address their impacts, allocate adequate resources for monitoring and preparedness, assess their changes in frequency and severity over time, and aid community resilience to them. Considerable variability exists in Canada, Mexico, and the United States in the choice and implementation of methods used at national and sub-national levels for estimating direct damages and indirect losses caused by floods.

Proposal for the creation of the Social Innovation Hub Anáhuac Mexico

The objective of this study was to improve the ability of regional and local decision-makers and communities to monitor and prepare for drought conditions through the development of a guide to locally relevant indicators for North American climate regions. Data were collected through an online survey that asked a series of questions on respondents’ experiences with drought in their geographical areas. A key series of questions queried the effectiveness of different drought indicators. Responses were analyzed to determine—according to the survey respondents—the most effective drought indicators for short-term and long-term drought in specific North American Köppen climate zones. Online webinars in English and Spanish were held to contribute additional information.

The purpose of this toolkit is to help North American urban, suburban and rural communities located inland or in coastal areas to mobilize and coordinate efforts to reduce and prevent improperly disposed trash from becoming marine litter. The toolkit was developed as an accessible resource for local organizations, community leaders and anyone passionate about leading […]

AirNow-International (AirNow-I) is a system that allows government agencies and organizations to collect, process, exchange, and communicate air quality observations and forecasts in real-time. With the goal of improving decision-making related to public health, AirNow-I also contributes to increased public engagement on air quality issues. Between 2010 and 2015, the Commission for Environmental Cooperation (CEC) […]

Version 2.0 of the guide, which was developed in 2020, provides a number of improvements upon the initial release based on feedback and input from pilot testers, expert contributors, and other individuals and organizations consulted by the authors. These improvements were designed to make the guide more user-friendly and allow readers to more easily find […]

The forests of North America play an important role in the global greenhouse gas balance by removing carbon dioxide from the atmosphere, storing it as “forest carbon” in forest ecosystems. Between 2013 and 2017, the Commission for Environmental Cooperation (CEC) invested C$770,000 in two 2-year projects focused on generating scientific information to improve our understanding […]

The Commission for Environmental Cooperation (CEC) held the Trinational Trade and Enforcement Training Workshop to Support the Legal and Sustainable Trade in Turtles and Tortoises in Miami, Florida, United States, from 24 to 26 October 2018. The development of this workshop was identified as a priority action in the CEC Action Plan for North America: Sustainable Trade in Turtles and Tortoises (CEC 2017). The workshop objectives were extensive and sought to understand the ecology and life-history traits of turtles, recognize the challenges presented by trade (both pet and meat trade), identify research and management needs to help achieve sustainable trade and maintain viability of wild populations in North America, develop or revise policy for achieving turtle conservation, and revise a priority-species list.

The Regional Workshop on the Evaluation of Capacities to Identify Woods in the Trade of CITES-listed Priority Timber Species was conducted as part of the Supporting Sustainable Trade of CITES Species project, under the Commission for Environmental Cooperation (CEC) 2017–2018 Operational Plan. The workshop took place in the city of Chetumal, Quintana Roo, Mexico, on 6–8 November 2018. It brought together policymakers, environmental law enforcement officials, and the authorities responsible for enforcing the Convention on International Trade in Endangered Species of Wild Fauna and Flora (CITES), along with researchers, producers, nongovernmental organizations, and industry representatives.

The North American grasslands are the only shared, contiguous terrestrial ecoregion extending across the three countries. Between July 2011 and June 2015, the Commission for Environmental Cooperation (CEC) invested C$990,000 in two 2-year projects focusing on grasslands conservation. The CEC conducted an assessment process to evaluate the impacts of this investment at two and four […]