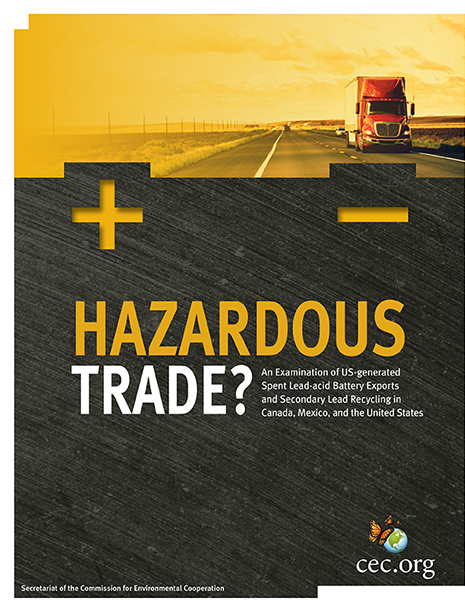 This report is an independent assessment by the Secretariat of the Commission for Environmental Cooperation (CEC) on the environmental hazards associated with the increase in spent lead-acid battery (SLAB) exports to Mexico, as well as the more general environmental management of the battery recycling sector in Mexico. It considers the implications of this trade relative […]

This report describes the steps needed to enhance environmental sustainability in freight transportation among Canada, Mexico and the United States. It was also prepared to stress the important link between environmental sustainability and an efficient, competitive, and secure freight transportation system throughout North America.

In this report, the Secretariat of the Commission for Environmental Cooperation (CEC) recommends that North American leaders make green building a foundational driver for environmental, social, and economic improvement in Canada, Mexico, and the United States.

This report comprises key ﬁndings and recommendations to the CEC Council concerning maize and genetic diversity in Mexico. The context, mandate, process, and guiding framework for arriving at these conclusions are outlined below. A glossary of technical terms is also attached.

The electricity sector across North America is currently experiencing a wave of unprecedented and rapid change. The opening of electricity markets to competition is underway or being considered in Canada, Mexico and the United States, and cross—border trade in electricity is growing, bolstered in part by the long—term stability conferred by NAFTA’s trade and investment […]

Biological diversity is a global asset of incalculable value to present and future generations. The three nations of North America, partners in the North American Agreement on Environmental Cooperation (NAAEC), are fully cognizant of the urgent need to conserve this vital asset and share an avowed commitment to maintain habitat by improving the management of natural resources for the preservation of endangered species.

The death of migratory birds at the silva reservoir (1994-95)

The cec secretariat report on the death of migratory birds at the silva reservoir (1994-95) was prepared at the request of non-government organizations from the united states and mexico. the report targets the winter 1994-95 mass mortality of migratory waterbirds in the presa de silva (silva reservoir), located in guanajuato state. the report includes recommendations […]