Seven steps for measuring food loss and waste within your business, city, state, or country.

Once you’ve determined that it is worthwhile to measure FLW, define what FLW means in your operations and how you will communicate that information, both internally and externally. Reporting FLW data publicly has multiple benefits: it raises awareness of the issue, allows for information-sharing among businesses, provides information to policymakers and assists FLW tracking efforts over time.

Public reporting should align with the Food Loss and Waste Accounting and Reporting Standard, or FLW Standard. The FLW Standard is “a global standard that provides requirements and guidance for quantifying and reporting on the weight of food and/or associated inedible parts removed from the food supply chain” (FLW Protocol 2016a). The standard clarifies definitions and shows the possible destinations of FLW when it is removed from the human food supply chain.

The FLW Standard does not provide specific guidance on tracking progress on preventing FLW. However, prevention can be tracked by establishing a base year as a starting point and assessing prevention efforts against that baseline. If total production is increasing or decreasing, intensive measurements (tonnes per unit of production) can better quantify how much FLW was prevented. For example, a company may set a base year of 2016 when it had 15,000 tonnes of FLW. The following year, the FLW may be 13,500 tonnes, meaning 1,500 tonnes of FLW had been prevented.

A hypothetical example of how prevention can be tracked alongside FLW amounts is shown in Table 2.

Reporting using the FLW Standard requires setting the “scope” of your FLW, as shown in Figure 2. This scope includes only food that has been removed from the human food supply chain, meaning that food donated, redistributed or otherwise kept in the food supply chain is not included. Tracking redistribution of food may align with your objectives and can be tracked using a method similar to that outlined in the section “Tracking Progress on Preventing FLW.”

Figure 2. Scope of an FLW Inventory 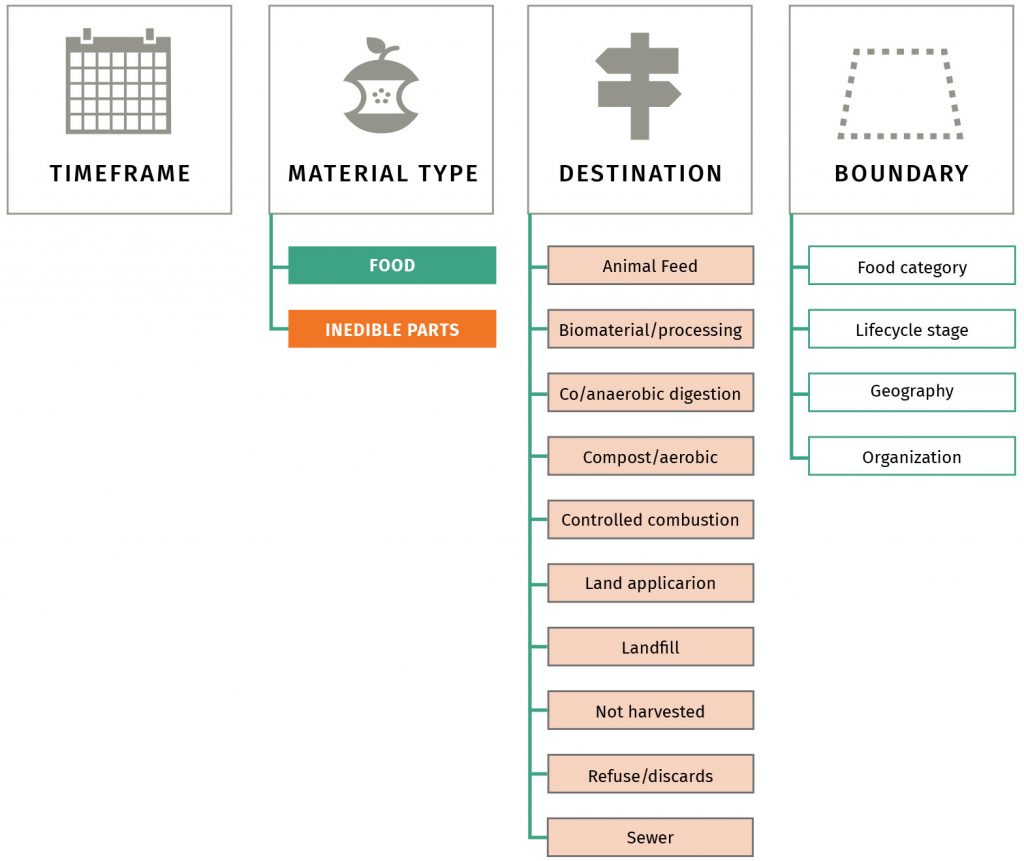 The destination is where the FLW goes when removed from the food supply chain. The 10 categories for destinations described in the FLW Standard are listed and defined in Table 3. Again, these destinations are only for FLW that has been removed from the human food supply chain and does not include prevention or redistribution of FLW, which can be tracked as described in the module “Tracking Progress on Preventing FLW.” Food that is distributed to humans outside the marketplace is not considered to be lost or wasted, since it is not sent to a destination.

Table 3. Definition of FLW Destinations used in the FLW Standard

Food that is recovered for donation to feed hungry people, and that would otherwise be lost or wasted, is generally not considered to be FLW and therefore not identified as a destination in Figure 2. Some organizations may also exclude animal feed and bio-based materials/biochemical processing (where material is converted into industrial products) from their definition of FLW.

While definitions and scope of FLW can differ, it is nonetheless important to measure all possible end destinations of recovered food and FLW to support efforts to minimize operational inefficiencies.

The boundary has four components:

Disclosing the scope of an inventory is important because numerous definitions of “food loss and waste” exist. Some include only food but not inedible parts, while others consider only a subset of the possible destinations in the FLW Standard. By disclosing the scope of an inventory, a business or government clarifies its definition of FLW, thus allowingfor more accurate comparisons and tracking of FLW over time.

The FLW Standard contains a number of reporting resources. Chapter 6 outlines the process for setting a scope, and Chapter 13 provides additional guidance on reporting. A sample reporting template and customizable scope template are available for download.