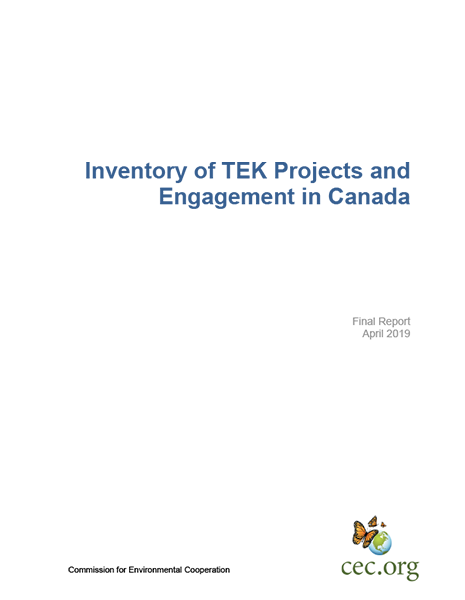 Inventory of TEK Projects and Engagement in Canada

Inventory of TEK Projects and Engagement in Canada

This study identifies – but does not assess the efficacy of – existing frameworks in Canada for the engagement of Indigenous communities associated with Traditional Ecological Knowledge (TEK) at the international, national, provincial / territorial, and community levels, as well as TEK-related projects undertaken by universities and research institutions, public and government institutions, and private sector partners in Canada that have included the engagement of Indigenous and local communities.

The purpose of this Compilation of Engagement with Indigenous Communities and Experts Associated with TEK in the United States is to assist the Commission for Environmental Cooperation (CEC) and other partners engaging in work that involves TEK. This paper provides an inventory of existing frameworks in the United States that provide mechanisms for the voluntary engagement of indigenous communities and Traditional Ecological Knowledge (TEK) experts.

As part of the North American TEK Atlas project, the present guide is a companion to the Inventory of CEC initiatives that have included Indigenous engagement. This inventory spans the entire history of CEC activities, from 1995 to December 2018. It involved keyword-based research from the CEC website and publication archives as well as discussions with CEC Secretariat staff to identify most initiatives.

The influence of ship emissions on air quality in Mexico and the potential improvements resulting from the ratification of Annex VI of the International Convention for the Prevention of Pollution from Ships (Marpol Convention) and the establishment of a Mexican emission control area (ECA) have been evaluated using the WRF-Chem air quality model. The model’s […]

This document presents the key premises and results of the fuel supply and cost analysis, in support of Mexico’s submission of an Emission Control Area (ECA) designation proposal to the International Maritime Organization (IMO), under Annex VI of the International Convention for the Prevention of Pollution from Ships (Marpol Convention).

This guidance document provides a framework for Mexico’s environment ministry, the Secretaría de Medio Ambiente y Recursos Naturales (Semarnat), to develop marine vessel (ship) emissions inventories based on local data that accurately represent all domestic and international marine vessel traffic occurring in Mexico’s territorial waters. The methodology recommended in this document quantifies fuel usage and emissions, and accounts for improvements in fuel efficiency and reduced ship emissions through the use of low sulfur fuels, add-on controls, and operational changes such as slow steaming.

The present update of Mexico’s port emissions estimates was derived from a joint effort between the Secretaría de Medio Ambiente y Recursos Naturales (Semarnat) and Eastern Research Group, Inc. (ERG), in the context of a project undertaken by the Commission for Environmental Cooperation (CEC).

Summary of North American Accomplishments and Programs in Support of SAICM

This document summarizes the analysis and findings of a report developed for policy makers regarding work undertaken by the Commission for Environmental Cooperation (CEC) in support of the United Nations-Coordinated Strategic Approach to International Chemicals Management (SAICM). Specifically, it measures how the CEC’s work on chemicals management has helped achieve progress against SAICM indicators. This […]

Development of a Framework Document

Documentation from the multi-stakeholder workshop organized by the CEC Secretariat

The purpose of this Report is to provide a summary of the information presented at the Forum, and capture substantive discussion, issues raised, and suggestions for next steps. The Report is organized in accordance with the Forum agenda. All presentation “PowerPoint” slide shows used throughout the Forum are hyperlinked in this Report. This Report also […]