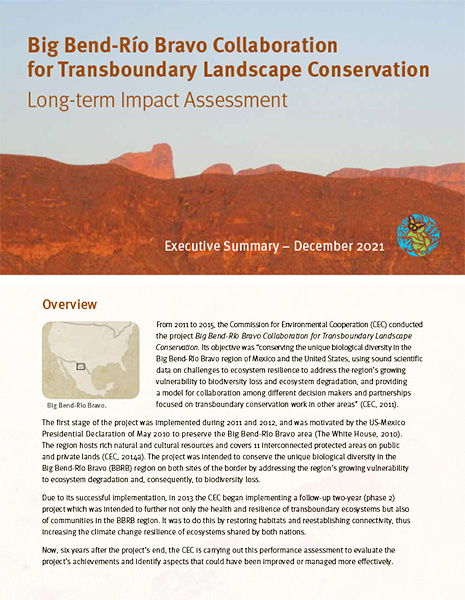 From 2011 to 2015, the Commission for Environmental Cooperation (CEC) conducted the project Big Bend-Río Bravo Collaboration for Transboundary Landscape Conservation. Its objective was “conserving the unique biological diversity in the Big Bend-Río Bravo region of Mexico and the United States, using sound scientific data on challenges to ecosystem resilience to address the region’s growing […]

AirNow-International (AirNow-I) is a system that allows government agencies and organizations to collect, process, exchange, and communicate air quality observations and forecasts in real-time. With the goal of improving decision-making related to public health, AirNow-I also contributes to increased public engagement on air quality issues. Between 2010 and 2015, the Commission for Environmental Cooperation (CEC) […]

The forests of North America play an important role in the global greenhouse gas balance by removing carbon dioxide from the atmosphere, storing it as “forest carbon” in forest ecosystems. Between 2013 and 2017, the Commission for Environmental Cooperation (CEC) invested C$770,000 in two 2-year projects focused on generating scientific information to improve our understanding […]

The North American Pollutant Release and Transfer Register (NAPRTR) Initiative originates from a commitment of Canada, Mexico and the United States under the North American Agreement on Environmental Cooperation (NAAEC) to enhance the quality and comparability of PRTR data across the region, through improvements in methodologies for data gathering and management, electronic communications, and analyses, […]

Because our environment does not end at the border, the CEC has developed over the last 22 years a unique framework that harmonizes geographic information in a seamless manner across North America’s political boundaries. Its North American Environmental Atlas aims at better monitoring environmental trends and land-cover changes in the region.

Since 1996, the Commission for Environmental Cooperation has been actively involved in the conservation of the monarch butterfly (Danaus plexippus), a symbol of trinational environmental cooperation between Canada, Mexico, and the United States. Although interrupted for a few years, CEC efforts to conserve the species intensified after population declines were recorded at overwintering sites in […]